Censored! A Letter to the People of Occupy Toronto 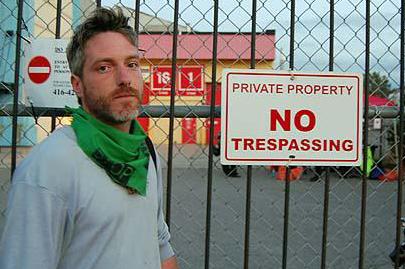 Here’s a letter I posted to all of the people at Occupy Toronto- that is, all of those who I could reach. It seems, unfortunately, that some of the people who consider themselves as leaders in our leaderless organisation have decided to practice conviction without trial. So, contrary to our agreement, they blocked my ability to send this letter out…

Last week Dave Vasey wrote to me and told me that I was no longer welcome to attend the action committee. He stated that, if I chose to attend, I would be removed by one of the marshalls. Despite the fact that he was the only person requesting this, and I had three people at the meeting who support me- I decided it would be best to leave for that meeting and put my case in writing. The meeting was to be about taking actions- not about me.

The reasoning for there is a letter posted online that makes serious allegations that I was harassing Dave’s friend- a high profile activist named Harsha Walia. To begin, let me point-out some problematic issues with how the letter was posted:

1. The letter is posted on a website called “occupiedvancouver”. The domain name has been constructed to look like it is an official site of Occupy Vancouver in order to confuse people who see it. In fact, the domain has been specifically setup for this attack on my reputation.

2. The letter is posted on a blog that is has been created for no other reason other than to slander me. Please notice that the letter is the only content on it.

4. All but about 12 of the people on the list have either never met me before for longer than five minutes- the majority are people who have connections with Harsha Walia, or work with associated organizations.

5. 20 of the people on the list were surprised to hear that their names were on the letter when I contacted them.

6. The content of the letter is an ad-hominem attack– it only makes a vague accusation that does not quantify what happened.

7. You will notice that there is one very important name missing from the list- that of Harsha Walia herself!

Put simply, this letter was a Nixonion-style dirty trick. Every person who understands the circumstance behind this letter sees it as an abhorrent example of violence.

So, let me explain the background behind this attack…

Vancouver’s anti-Olympic movement had a large and diverse set of supporters on the first day. During the planning phase, the group consisted primarily of First Nations (No Olympics on stolen land), and middle class people who were mostly new to activism (Healthcare Not Olympics). In the name of “creating unity” leaders at the Council of Canadians convinced everyone it would be a good idea to invite Black Bloc practicing anarchists into the mix.

If you weren’t in Vancouver, you would have no doubt seen the results on the news. The first march turned out to be violent – with significant property damage and a street fight started by the Black Bloc against the police. That moment marked the end of the anti-Olympic movement. The violent people stayed, and the remainder went home.

Not only was this a significant setback for the Olympic movement- but, still today, many people in Vancouver are reluctant to join activist movements. Put simply, this incident was the worst setback in the history of Vancouver’s activist community.

Derrick, a gentle man who writes about the human cost of war, spoke with the press on the day this happened – expressing his disappointment with what happened. In retaliation, he was terrorized for many days with insults, accusations, and threats against his safety. After several days of abuse, he agreed to settle the matter in a public debate with Harsha Walia.

The debate was another dirty trick- the audience was stacked with people who supported Harsha and applauded at her every word. Right at the start, she discredited his opinion using his race and gender  a reason to discredit his position. Outside of the people directly connected to Harsha and the Black Bloc, everyone who has seen this video viewed this tactic as abhorrent- including several people at Occupy Toronto. Here is a link to the video, please watch and you will understand.

On October 10th of last year, someone posted this video on the original Occupy Vancouver Facebook page. I went online shortly after it was posted, not knowing it was there. I immediately noticed that Min Reyes (one of the original people who put OV togethr) was facing a barrage of hate and anger for having expressed her opinion on the video. Seeing Min’s pain, I joined-in to help her- we both faced non-stop hateful comments from a couple dozen people- these included racist, sexist and classist insults. This, despite the fact that most people didn’t know anything about who we were.

The attacks died-down after several days, and there was no sign of violence until November 13th- which was also the first day that Harsha had come to the camp. Shortly after I arrived, a group of Black Bloc came to the camp, and Harsha was there talking with them. Shortly after, on a march, they initiated a street fight with the police that resulted in one officer being hit in the face with a flagpole.

Regardless if Harsha was partnering with them or not- her words during the debate acted as an enabler for the people who enacted out the violence. This was the first of six Black Bloc incidents that occurred over the next month. I wrote to Harsha,wrote a number of articles about the subject, and reached-out to other occupations to get advice and support. A lot of this outreach was done on Twitter- connecting to several high-profile allies who all concurred that we needed to stop the violence:

Next I was subjected to another dirty trick. Someone took a transcript of my twitter conversations, stripped-out everything but my messages and showed it to people saying that I sent 150 messages about/to Harsha. The problem is that they didn’t see there were another 300 messages coming from other people. So, most people who did agree to put their names to the letter were fooled into it. But, there were also those who blindly followed- three of them can be seen cheering in the audience as Harsha defended her position against Derrick O’Keeffe.

I have worked full-time on Occupy since two weeks before we broke ground at the Vancouver Art Gallery. During that time, I have made highly significant contributions to our movement. Some of the highlights of my work include:

My blog, which has had over 1 million hits, has provided the world with an honest and straightforward record of our movement. By discussing both our victories, and our success, I’ve gathered a loyal following of people who trust what I say, and appreciate both sides.

So, my new friends, I leave you with to consider my fate. I came to Occupy Toronto with the intention of continuing my good work, and helping make our movement successful alongside you. I trust you will see through the haze of smoke from the attacks against me, and will realize that I am as passionate about this movement, and as ready to make it successful as any of us.

Thanks for your time,

14 responses to “Censored! A Letter to the People of Occupy Toronto”