An Open Letter To Thomas Mulcair 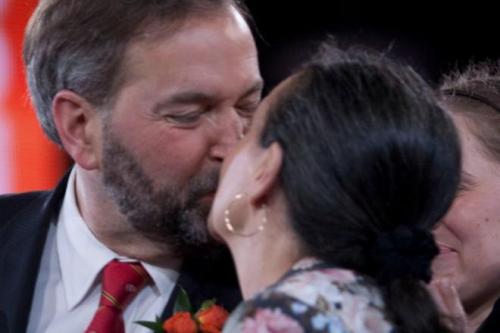 You have a big problem on your hands, as does the rest of the country. True, every political party has its loonies- but, the NDP’s crazies are a danger to our country…

Previous to joining the Occupy movement, I had no idea these people existed in any significant number here in Canada. I figured there were a dozen or so in each city perhaps- but they number in the hundreds. And, they are bound-and-determined to use violence to execute political change.

The problem lies with members of the NDP’s Socialist Caucus and radicalised members of some unions (CUPE, United Steelworkers and the CAW are prominent in this case). This  group are followers of Marxist/Trotskyist philosophies- meaning, that they are revolutionaries who don’t believe that change can be enacted without the use of violent force.

They are also members of organizations like No One Is Illegal (NoII), AW@L and the International Bolshevik & Marxist Tendencies. These organizations are everything Canada doesn’t want to be. Not only do their members promote the use of physical violence- but they are vicious obedience cults who conduct social violence to people inside and out of their membership.

The reality is that these people consist of only 10%-15% of the NDP’s membership- yet, for some reason, prominent members of your party keep pandering to them, despite their violent ways. People like Don Davies who marches along with NoII, promoting their cause through his Twitter account. Or Libby Davies, attending silently in the audience as NoII’s Harsha Walia uses a man’s gender and race to publicly berate a man’s view on the need to be peaceful.

Meanwhile, undecided voters (who appear to make-up the majority in our country) are so turned-off by this radicalism that they couldn’t imagine voting for, or supporting, the NDP. The majority of Canadians can support evolution, not revolution.

It is time for your party to stand-up against these thugs and show Canadians that the majority of your party won’t support this violent & radical fringe. True, you may lose some of your members- but, that is good for all of us- and, eventually, you will see that your party will grow.

So, do you have the courage to do this? Or, is the NDP to be relegated to the scrap-heap like the Waffle…

5 responses to “An Open Letter To Thomas Mulcair”