It was another beautiful day for a demonstration- the sun was shining and was mercifully accompanied by a cool soothing breeze. Spirits were high when I arrived on the scene. There was a small contingent of police- less than usual, I’m guessing this was related to Prince Charles’ visit…

END_OF_DOCUMENT_TOKEN_TO_BE_REPLACED

An Open Letter To Thomas Mulcair

You have a big problem on your hands, as does the rest of the country. True, every political party has its loonies- but, the NDP’s crazies are a danger to our country…

END_OF_DOCUMENT_TOKEN_TO_BE_REPLACED

Posted on May 20, 2012 | Comments Off on Black Bloc Unmasked: And Brandon Gray’s Real Name Is…

Comments Off on Black Bloc Unmasked: And Brandon Gray’s Real Name Is…

New, for a limited time only! Special-edition dolls celebrating the contributions of two brave women who are boldly screwing up activist movements across the country- Harsha Walia & Ashleigh Ingle!

END_OF_DOCUMENT_TOKEN_TO_BE_REPLACED

More Clues About The NDP Marxists Involvement Behind The Quebec Strikes!

Posted on May 17, 2012 | Comments Off on More Clues About The NDP Marxists Involvement Behind The Quebec Strikes! 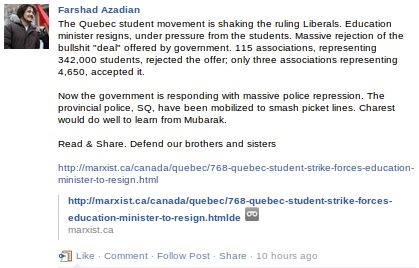 Here’s a screenshot from the Facebook page of the people organizing Spread the Quebec Strike! Demand Free Education! in Ontario.  These are the same people who I believe are going to attempt to interrupt Prince Charles’ visit to Toronto next week.

END_OF_DOCUMENT_TOKEN_TO_BE_REPLACED

Comments Off on More Clues About The NDP Marxists Involvement Behind The Quebec Strikes!

Anarchy In Quebec! (Time to talk to the NDP…)

A group of thugs invaded the Universite du Quebec a Montreal today. Spray painting the walls, invading classrooms and calling the students scabs for daring to go to classes- and, a couple of women were assaulted. What happened was like the early stages of a new Kristallnacht– how can we accept this kind of hooliganism in Canada?

END_OF_DOCUMENT_TOKEN_TO_BE_REPLACED

Toronto Occupiers, do you recognize where this is being filmed? Yep, the exact same place that the hijackers moved the GA to this winter! Others may remember this as the place where Alex Hundert and his gang of thugs stopped me from entering the GA!